We talk to Adina Popescu about her project ÆRTH, which envisages a digital twin of Earth based on real-time data, intended to change the way we share information about our precious planet. Interview by Apiary founder Leslie Claire and digital research fellow Carl Hayden-Smith. 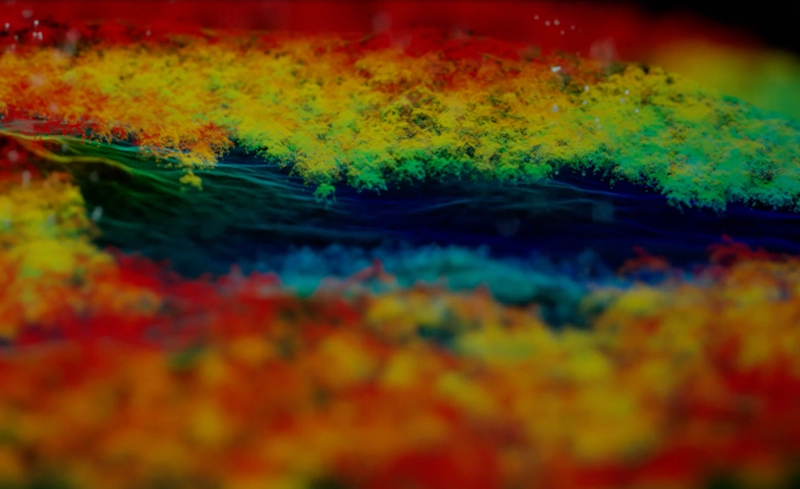 Antenna: Can you tell us about the ideas and intentions behind ÆRTH?

Adina Popescu: The ÆRTH project presents a new platform, combining Big Data, Blockchain, Remote Sensing, and cutting edge Environmental Science in order to produce an authoritative and detailed model of the state of our world. Interactive mapping and data visualisations will cultivate emotional connections with large audiences, and blockchain will be utilised to enable collective ownership of the platform and incentivise participation. This platform aims to help us collectively address the environmental crisis.

AN: Why do you think NFTs are interesting?

First of all I think it is very confusing how many artists are rejecting NFTs, when they are actually very empowering for them. I think this stems from a defensiveness of not fully understanding the complex tech behind it, so they jump to the hype narrative which then they reject. If they really understood what an NFT was, I think they would embrace it, because it is their freedom to own and live off their own artistic creations.

AN: You’re so passionate about decentralisation and blockchain technology. Could talk about how and why you want to engage with this technology for those that aren’t so acquainted with DeFI?

For example, what we are doing here at ÆRTH is data sharing about environmental health. In the old economy, companies and institutions are siloing their environmental data. For example, the solution we are working on at ÆRTH uses DeFi and decentralised protocols to generate an incentive and a market place for an infinite amount of stake holders share, connect and bring value to their data. Raw data is often useless if it is not being contextualised and enriched by other data sets that an organisation may not have and would have to buy. By establishing a shared data lake we are creating an opportunity for an infinite number of data providers, scientists and innovators to scale innovation by being able to enrich their data and build better algorithms; which will in turn allow them to scale innovation and measure their impact for the planet. Within classical business models and company structures, to operate on such a scale is simply not possible. DeFi is providing new economic frameworks to allow something like this to come into existence.

A lot of artists, especially digital and VR artists, ask me how they could actually build a real time model of the planet. Turns out they cannot because there is no available data on our most precious environments. For example, you can easily build a digital twin of San Francisco because of the ubiquitous sensor and GPS signals in urban areas; but you cannot build a digital twin of the Amazon. It turns out that where we would need the most visibility to see what is actually going on is absolutely in the dark. So artists, like Marshmallow Laser Feast, that are building immersive data based experiences of a tree, for example in their project ‘Tree Hugger’ would gain access to real time data sets in the Amazon rainforest via our data lake. This would create visibility and engage audiences into what is really going on in the Amazon. 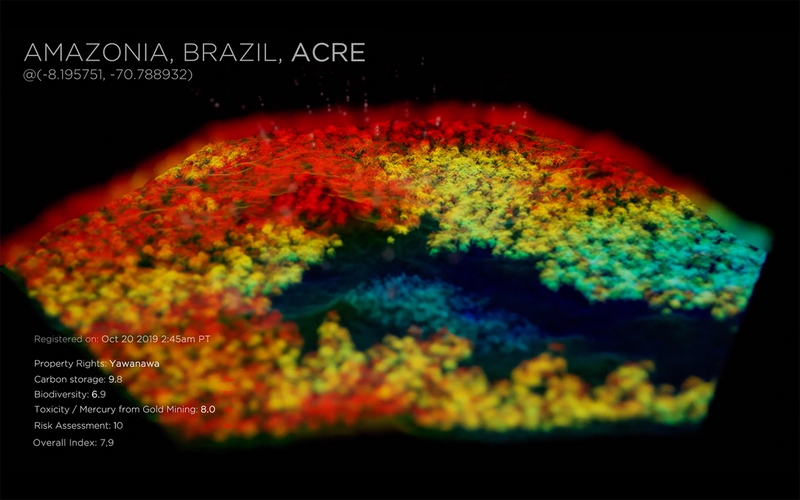 AN: Could you speak more about ÆRTH token economy?

Our token economy allows to pay every data provider and scientist involved in this process with an infinite number of participants. Centralised companies would structurally not be able to do that.

AN: You keep using this hashtag #showmeyourdata. What does this mean?

All these impact investors and companies are telling us about their “impact”, but besides their press release there is no chartable evidence for their impact. We lack a data model that can transparently and reliably prove these companies and KPIs true impact in a way that is legible to everybody. This is what we are building. Data transparency leads to trust and collaboration on mass scale to unforeseen innovations and solutions for the planet.

AN: Can you speak further about the ÆRTH dataverse?

Raw data only has value if it is being enriched and contextualised, which is the basis to create a good algorithm. An algorithm can only be impactful if it is being visualised in real time so that people can interact with it. This then leads to knowledge and awareness. So the dataverse is using this growing interconnected web of algorithms, and giving them a visual language and a body. This is what we call dynamic data NFTs, but I do not want to go into this before we launch. Such a geo and time hashed data verse would give the basis for a VR experience or a game to actually run on real world data instead of just depicting an imaginary world.

AN: As an organisation of artists, Apiary is really interested in what NFTs are. I think we are still at a stage where most people don’t get it, and a lot of it just looks like crappy street art right now. Carl, can you comment on why you think NFTs are promising?

Carl H Smith: I hosted a panel on NFTs at the British computer society over the summer and I am particularly fascinated by this technology, because recently we have gone through quite a period of artists being devalued, especially musicians, (through platforms such as Spotify).

As soon as something becomes data it can become easily copied and therefore has the potential to lose its original value. NFTs can enable to logging of intellectual property and could eventually act as an alternative form of trademarking or patenting. This is because NFTs are logged on the blockchain as, 'this original creation has been created by X'. NFTs for IP is one of the things I’m interested in and is the reason why I am working with groups like UNCOPIED. UNCOPIED look at how we can certify that a piece of work is indeed by the original artists. In terms of collecting NFTs, I think it’s quite problematic.

I’ve just invested in Damien Hirst’s project, 'The Currency' project, which is starting to get really interesting. Damien Hirst created 10,000 original artworks, which have initially launched as 10,000 NFTs. If you were lucky enough to get one, you have to now decide between burning the actual original artwork and keeping the NFT, or not keeping the NFT and taking your original artwork. When the project first started the buyers imagined, 'Oh well, clearly, I’m going to take the original Damien Hirst artwork for two grand' (which was the initial price of the lottery).

AP: Okay I know where this is going. He is so smart!

CHT: So it’s called a Tender, and there are 10,000 Tenders, so he’s effectively created his own bitcoin. The reason why Tender has gone mental is because what was two grand, is now 30-40 grand, per Tender.

Each Tender has its own individual name. Hirst used AI to create the names, and employed assistants to create the original artworks, they’re spot paintings, they’re about 8 x 4” in size. But everyone now is questioning, ‘Why would I keep the original artwork that’s never going to be worth 50 grand?’ It can only be worth 50 grand if everyone keeps their NFTs. So initially they all predicted most buyers would not keep the NFT – so maybe 90% would keep the original artwork, 10% would keep the NFT. Now it’s gone the other way. Fortunately the collectors don’t have to decide for a year, but effectively all that artwork could be burnt in favour of the virtual. Obviously people hate Damien Hirst for it – and it’s not even a new idea because Duchamp did it in the 30s; but I think it is super interesting from the NFT perspective.

AP: Well, first of all I think it’s genius what he’s doing, because ultimately he’s already pointing the finger on how the art market works. Ultimately it doesn’t matter if you hold the art piece, because what you hold is a signature that it’s an authentic Damien Hirst. And every artist can get to a point where he’s just making a spotted painting or whatever he wants, you know just a doodle, but because his name is underneath it, it can be sold on the art market for a very high price. So in that moment he basically says: If art is reduced to just the market value, then you can just make a license, digitalise the license, and keep the artwork. So ultimately he’s just exposing what is already inherent in the art market.

CHS: Exactly. But also I think art should be here to save the world, not to destroy it. At the moment, NFTs are very dirty for the planet. What I’m pushing for is a green revolution caused by the demands of electricity going through the roof because of artists and because of NFT hype.

AN: I'd like to talk more about the MLF project. Did you ever try 'Tree Hugger'?

CHS: It was amazing, right? So that was a lidar scanner which created a real 3D digital twin of a Redwood tree, captured I believe in Yosemite Park, California. I’ve been there; it’s astonishing. They got a lot of criticism for the project such as ‘Oh, you know it’s digital disconnect, you’re not in nature'. But you kind of are in a new form of nature; but it is not a CGI; is an actual digital twin of the tree and, for me my reaction was that we need to protect this.

The mycelium have survived five mass extinctions and humans are causing the sixth. What is it about mycellium intelligence that is opposed to the cult of the individual. We’re talking about something far, far more potent, which is parallel processing. So if we could create a digital twin of those mycelium networks, a digital twin of the Amazon, then what’s the next step? What I’d love us to get together with Marshmallow Laser Feast, with an expert in NFT, and also with Rain reforesting idea, because I would love to get my head around how we could all work together to create something profound that would protect the Amazon. The reason why the Amazon is being destroyed is because people on the ground who live in the Amazon think that it’s their responsibility to work the land, right? So unless they’re actually incentivised not to destroy the Amazon, then they’re going to destroy the Amazon.

CHS: So when will we be able to see the first sight of ÆRTH?

Adina Popescu is a Digital Creator and founder of ÆRTH. Follow the project at Aerth.live

Carl Hayden-Smith is the Director of the Learning Technology Research Centre (LTRC) and Principal Research Fellow at Ravensbourne University London. You can find out more about Carl's work in his recent Ted Talk and connect with here.