The Fabric of Magic
September2022
Interview 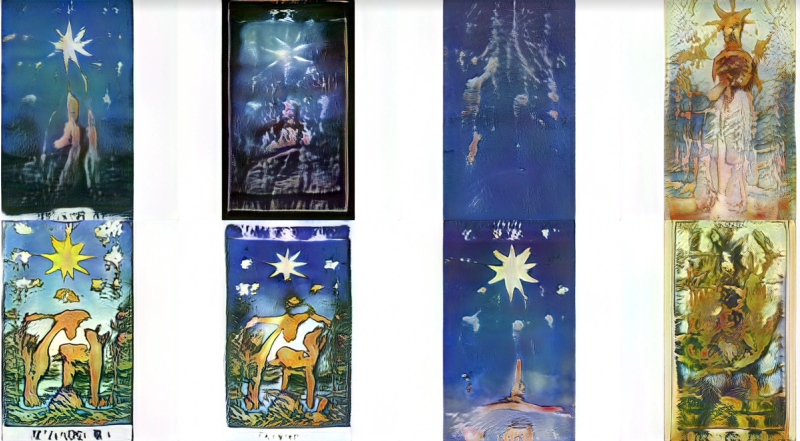 Tell us about your tarot of latent spaces

We're running an imaginary Silicon Valley startup called Hermetechnics Inc, and for several years we've been exploring weird areas between occultism and technology. Tarot of the Latent Spaces is our most recent project, it's a deck designed with the help of machine learning. Each major arcanum has a separately trained model, that tries to find the common features on a dataset that consists of dozens of different card designs.

Let's take a single trump, like the fool. The model is trained so that the algorithm tries to pick up the 'essence' of the fool which is present in all the different designs across various decks. The result is a model of a fool archetype, a form, if you will, that can generate an infinite amount of images of the card - through the latent space, (hence the name).

How does it work?

So you've probably seen those StyleGAN models trained to spot a, let's say, dog, on a picture. How you teach the machine, is that you show it hundreds of different pictures of dogs, and it learns to extract this essence of 'dogness' from it. It picks up all the different sizes, and colours of various breeds. It also learns to abstract over different techniques used for an image whether it's a photo, an ink drawing or oil painting. It encodes it into a mathematical representation - which then can extrapolate this knowledge even for pictures never seen before. This model basically enables us to separate the style of an image from the actual content.

What's interesting is that you can ask the model not only to spot a dog but also 'inversely' to generate what it understands to be ‘a dog’. This is the mysterious latent space, a mathematical abstraction that allows us to generate an infinite amount of instances of this archetype. That's the whole point. What you see on the card is not the representation of all the model knows about the fool. It's just one of the infinite facets it contains. And this enables us to always generate a unique deck for each person - to allow each reader to have his personal subset of the archetypes, introducing another layer of personal divination.

What do you mean by latent space?

Let's think for a second about how humans perceive the world. We understand and categorize our experiences by encoding each observed event in compressed representation in our brain. Similar observations are stored next to each other. We constantly search for patterns, models, simplifications - we try to reduce the complexity of our environment to survive.

The machine learning algorithm does a very similar thing - it takes many external inputs and encodes them in a meaningful internal representation. The representation is not identical to the inputs, but it has similar structure and principles - that's the "As Within So Without" once again! This inner space has reduced complexity, it's compressed, it generalises. This is the mysterious latent space, the in-between of the observed events. I like to think about it as intuition, the principles that stay hidden from rationality. It's the fabric of magic. 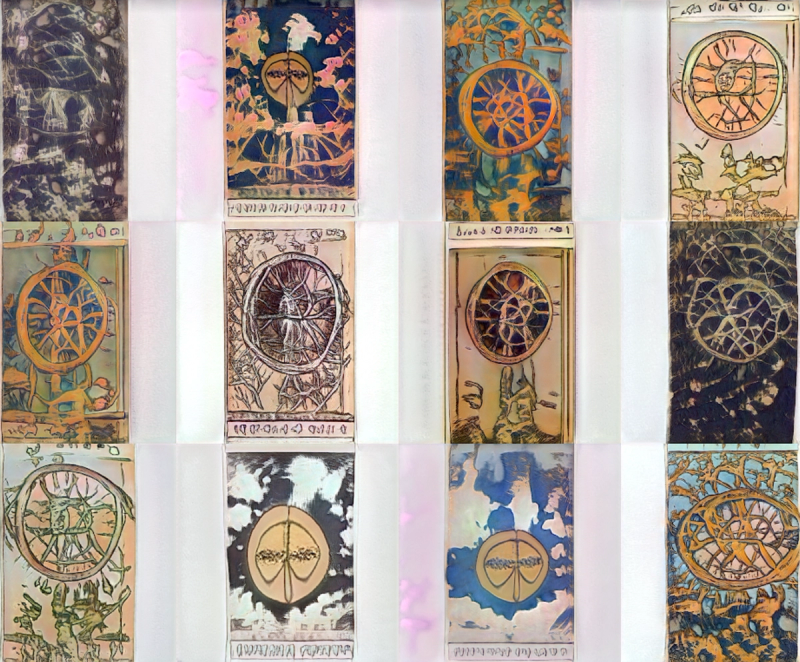 the Wheel of Fortune

My partner in crime, Jakub Fiala, established Hermetechnics as a critical investigation into techno-occultism, Silicon Valley startup culture and the role of esoteric traditions in a surveillance capitalist society. It's been a wild ride, we like to play both sides - we hosted several workshops exploring the interaction of occultism and technology at art conferences, but also posted open job positions on LinkedIn, posing as real tech-bros. My business cards say I'm a CTO now (chief tarot officer), and our copy says: 'We are on a quest to disrupt the esoteric market and use magick to create value for our shareholders.' It really leaves people with an uncertain feeling these days: are they taking the piss or are they for real?

Now, I think it's a very natural idea for everyone who's involved in both the occult and tech world.

Each Major Arcanum is a visual representation of an archetype that is very tempting to extract in its abstract form. This is all playing on the theory of forms, and the generative principle of kabbalistic emanation. We tried to approach this essence in its purer form. The results are quite surprising. You can always see hints of the most common decks like Rider-Waite and Marseille, because these were the most often used as templates by other artists designing their own deck, so the model would pick up on these commonalities the most. A lot of these machine learning experiments can get quite nerdy and dry, but I find the artistic side as important as the cerebral, so I'm glad they turned out so sexy.

But what's very interesting, is that people who've been using them for reading all report similar observations - they are very direct. No bullshit, straight-to-the-point answers. I've always felt that each deck has its own spirit and character, based on the artist's interpretation, and other related circumstances and it only makes sense that once you strip this layer of complexity and reach a more raw state of the archetype, the reading experience will be affected too.

I am also fascinated by more immersive and intuitive approaches to tarot. I tend to get all heady, studying big tomes on symbolism. But these cards take all of that from you. 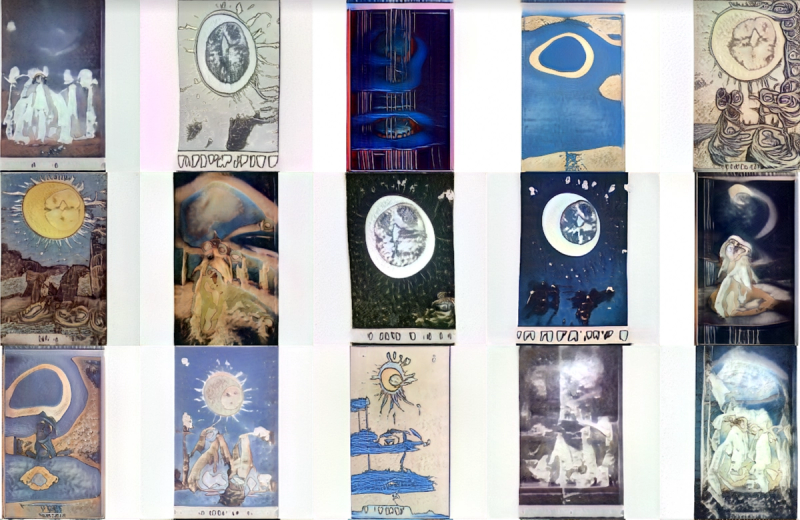 Can you tell us your thought about the connection between machine learning/ AI and Magik?

This is a topic that Hermetechnics Inc explores the most. The parallels between the mysterious dark waters of the unconscious and deep learning are just striking. All those Burroughs/ Gysin cut-ups, and surrealist techniques of sampling reality, playing with juxtapositions of various kinds - deep [machine] learning is the next logical step. What other better dip into the collective unconscious can you imagine than asking a model that's churned through all of the contents of the internet like GPT-3 did? Even the fact that it turned out to be a racist and sexist pig makes complete sense. That's it right here - our own mirror, stripped of the crutches of rationality.

Now of course, there are reasons why people stick to the orthodox ways of divination and magic. Lineages, prescriptive rituals and all these things have their place and I believe that mastering well-established techniques is super important for any magical practice. These things help us to figure out the principles. And once we do that, we are able to see the potential in new technologies, waiting to be harvested. I know many people who are involved in various lines of research in this field. It's such an exciting time to be around - from machine learning tarot, through shamanistic practice in the digital non-ordinary reality, to all flavours of weird discord covens. It's out there, growing, blooming and claiming new territories.

Karin Valis is a Berlin-based writer, musician and machine learning engineer, with a deep passion for everything occult and weird.