Zam Zam Records' eclectic and colourful catalogue delves into drone noise left-field abstract electronic psych new-rhythm and neopagan aesthetics. We talk to founders Héloïse Thibault and Olmo Guadagnoli on the even of their tenth anniversary. 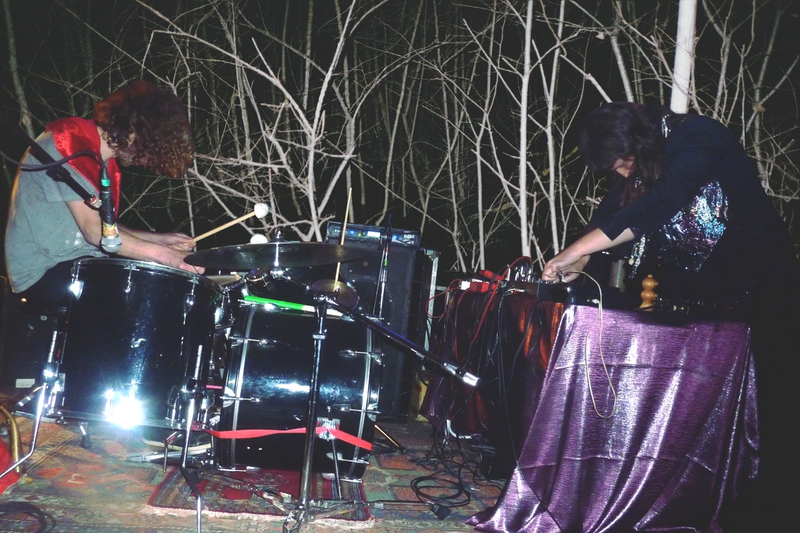 Antenna: How and where did you start the ZamZam label?

We started ZAMZAM Records in Bristol, UK, in 2011. We had just left Geneva and landed inEngland. We didn't know anybody there but slowly started meeting new musicians and friends. The music scene (rock, rave) was really flourishing, as always, but the experimental scene was a bit quiet at the time. So we thought that creating a label and organising gigs was the best way to herd the freaks and hermits together.

AN: What was your first collaboration?

We have been dedicated to our solo projects for a long time, respectively as H (H.lo.se) and Uiutna (Olmo). We first collaborated as a duo called DROGA, in which we both played electronic devices, drum machines and keyboards.

A few years later in Switzerland we collaborated with our dear friend Kro from Paris, as a trio called AIUTO, italian for HELP! We had a lot fun on tour playing electronics (H), Olmo (Bass), Kro (Pure data programmed drum kit made out of pipes) and a strobe! In 2013, we met Mark Wagner, with whom we first spontaneously merged together at the Woolf Festival in Wiltshire, forging a free improvisatory union, which we then took on tour to spread as sonic philosophy through Europe and the UK.

Working as H.U.M, a Pan-European occult electronic triad, we released a limited edition cassette ‘We Are One’ on Bumtapes label, and a debut LP ‘Trinity’ with Way on Rocket Recordings. Since 2015, we mostly play together as ZOHASTRE, french italian duo, a whirlwind combination of spacio-tribal drums and bewitched electronics (( /Ä/ * 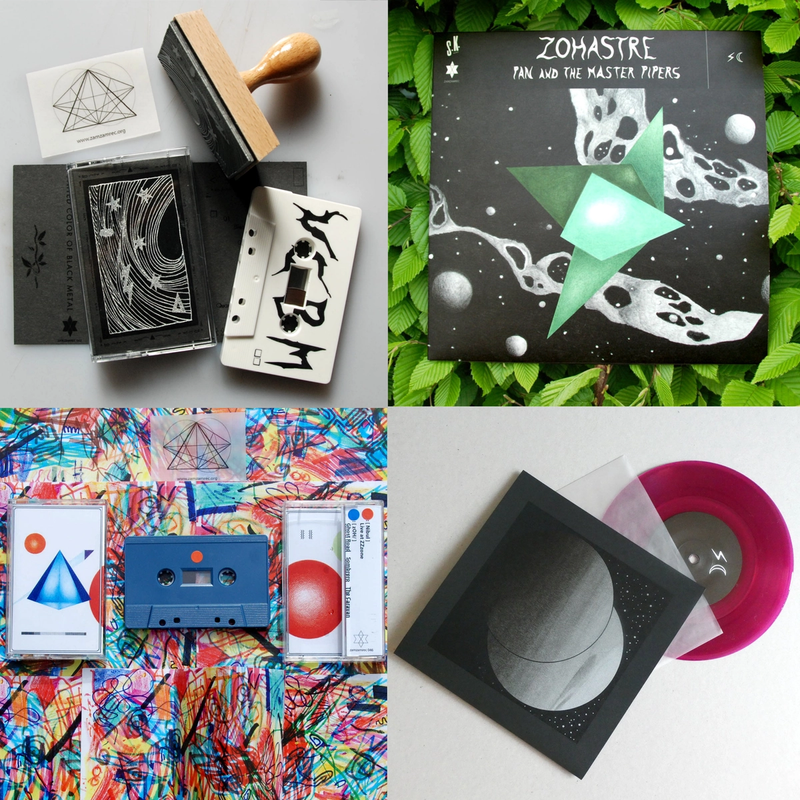 AN:Can you tell us about some of your favourite collaborations and releases over the years?

Yes! From the very beginning of Zamzamrec we did lot's of great collaborations. People like Matt Loveridge (MXLX/Gnar Hest/Fairhorns) and Deej Dhariwal (Thought Forms) were the first entities we met in Bristol and their music literally blew our minds! Gareth Turner (Big Naturals) & Paul Allen (The Heads) playing together as Anthroprophh, WO! Aonghus Reidy (Ocean Floor), Henry Collins (ex-Shitmat), all beautiful sonic souls. Tim Drage aka Cementimental the most absolute noise creature. We also found a family in Manchester with the GNOD crew. All their solo/duo projects (Negra Branca, AHRKH, GNOD_R&D) are incredible! When we arrived in France we discovered a great network of amazing people and places. We crossed paths withNibul, c_c, LFL, Pascal Dickens, and many more. Our favorite ZZ releases so far is a mysterious double cassette called ‘Oboustranně dvoud.lný’ by Střed Světa, and the most astonishing ‘Prepared Rain’ by Henry Collins ^^ 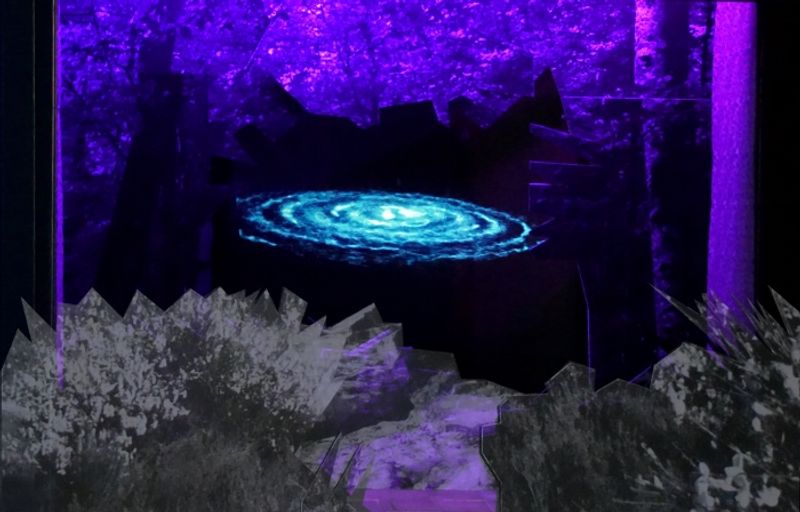 AN:How does visual art interact with your practice? Can you tell us about some of your sonic sculptures?

We both studied fine arts in Geneva, and have always been involved and interested in visual arts,. Art is an integral component of the label and part of our own practice. We give a huge space to the graphic design and look for the visual identity of each release. We like to create covers for tapes and vinyls, listening to the album over and over! The music sparks images, geometries and symbols, reveals or invents new spatio-temporal dimensions. Eyes closed, it is therefore possible to picture magic windows ))) /Ä (((

The aesthetics of the label reveal itself gradually, it becomes more precise, sometimes it does escape too. Retrospectively, we see a beautiful coherence, leitmotivs, shapes, colors. We recently launched a new series of more handcrafted covers, we found a pocket printing process, using an ink-stamp on fine shimmering paper.

With Zamzamrec we're also working in the field of Visual Art, we're producing immersive and initiatory pieces in collaboration with other artists. The idea is always to modify the perception of space and time and disrupt the boundaries between the real and the imaginary.

Together with Waj, an english sculptor based in the Loire Valley, we created a monumental and interactive sound installation called ‘Gis.le Webmaster’. She was a giant biomechanical spider, made of bamboo and metal. Her web was made of springs/slinky, connected to contact-microphones, which were connected to effects pedals and speakers hidden in the animal’s paws. The audience touches the web and generates ‘inputs’, producing strange and supernatural sounds. Pretty Sci-fi slash goth as a trip!

We also collaborated with Viktor Konwicki, a Swiss video artist and video game creator, to make up an hologram of a galaxy, night vision amongst the trees, intergalactic mirage, space gateway, secret door to an extra-dimensional and mysterious place…

AN: You are currently recording a Zohastre LP around the idea of ‘experimental bal musette and weird magic’. Can you tell us about the project and what is 'weird magic'?

Playing together as Zohastre is an astronomical word game, a compound of initials and stars, and a tribute to Zarathustra. We call ourselves a troubadour/travelling minstrel from outer space. The set is a forest at night. Like you’ve crept up on a long-lost village in the valleys, peering over from behind the trees in the dark, staring at a huge flaming fire with the villagers dancing in circles, everyone possessed by the incantatory power of the moon and the fire.

Our debut LP was called’ Pan and The Master Pipers’. We like the idea of ancient gods hidden, waiting to be awaken by drony yet volatile sounds, heavy and deconstructed rhythms, enchanting and shrilling bagpipes, echoing in a sea of shooting stars.

We are now recording our second LP ‘ABRACADABRA’, a series of seven ecstatic freewheeling tracks. We face each other, synchronize and practice accelerated audio gestures. Olmo plays the drums, H a table of electronic devices including two bass sequenzers, a kaos pad, a looper pedal, a waamy, a delay pedal, two overdrives/distortions and a tape player. We edit/modify samples of pipes from different countries, like a biniou from Brittany or a zampogna from Sicily and put them back to magnetic tape. This way we're creating a tension between ‘forgotten’ and ‘new’ sounds, music for trance like FX and super sonic teletransport. We like to plunge the audience into a popular street party and invite them to ‘dance backward like in the frenzy of balls musette’ (accordion style with Lightning Bolt as special guests)!

AN: How magic has played out in your careers?

It is all about magic! Z/ÄMZ/ÄM is the formula that combines music and magic. When alchemy rhymes with fantasy, enlightenment with enchantment. The music we play as musicians and publish as a label is dreamlike and visionary. Giving you the finger inside the pyramid! The Zamzam adventure started with a magic sparkle, and we haven't stop following our inner compass since. Signs, rituals, state of sonic wonder. The ZZ caravan is slowly moving while the star shines…

AN: Would you describe your work as futuristic?

With Zohastre, we work on complex patterns, riffs and rhythms, we play with a lot of different instruments, both acoustic and electronic. The way we're using drums with analogue synths, tapes and birds whistles, going through FX pedals expresses the will to condense the past and the super-future, to create a weird neopagan sound. We connect with ancestral emotions, activate distant/unconscious memories, spirits and sonorities to unleash an intense and atemporal experience, hypnotic/hallucinatory momentum, elevating into cross-eyed digitrance before reaching ecstatic bagpipes equilibrium. Past and present converge to the future forging a Space Triangle *))) ▲ (((*

AN: This year represents 10 years of Zam Zam label. How are you planning to celebrate? 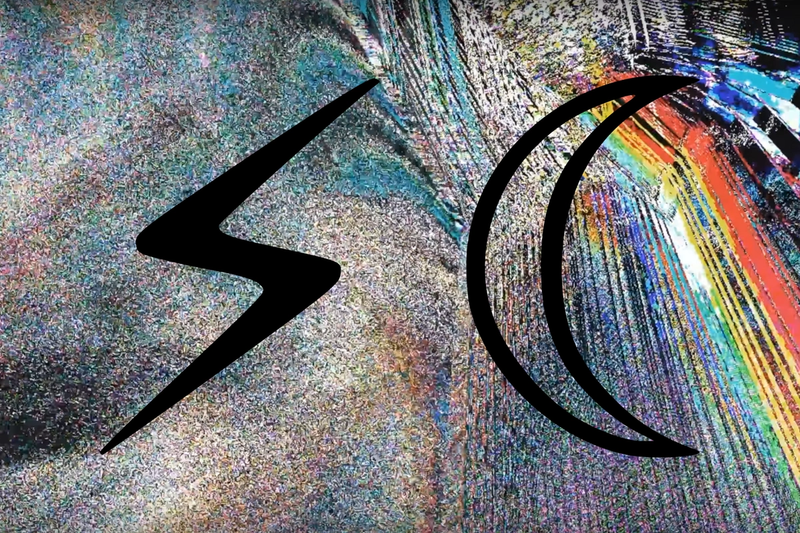 AN: Plans for your next creation?

We are actually working on the next upcoming releases, both on tapes and vinyls. We carry on weaving the Z/ÄMZ/ÄM tapestry with an eminently artistic, cosmic and magic aim. Stay tuned /Ä<3 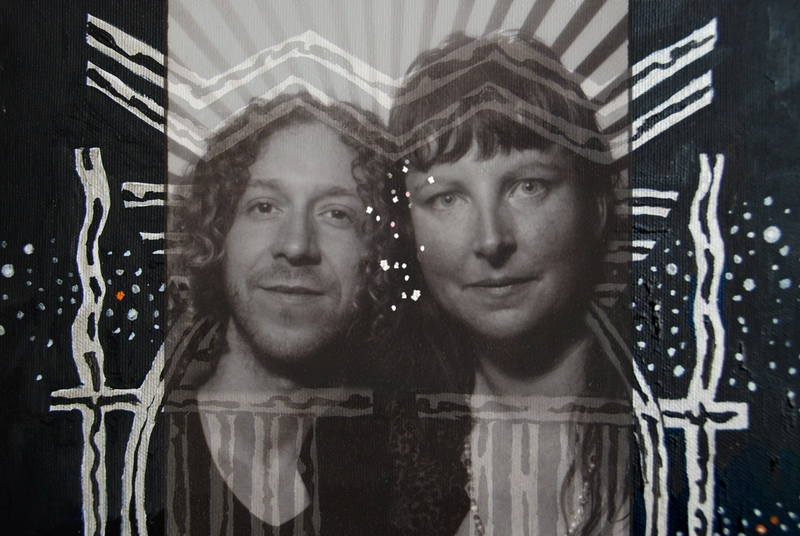