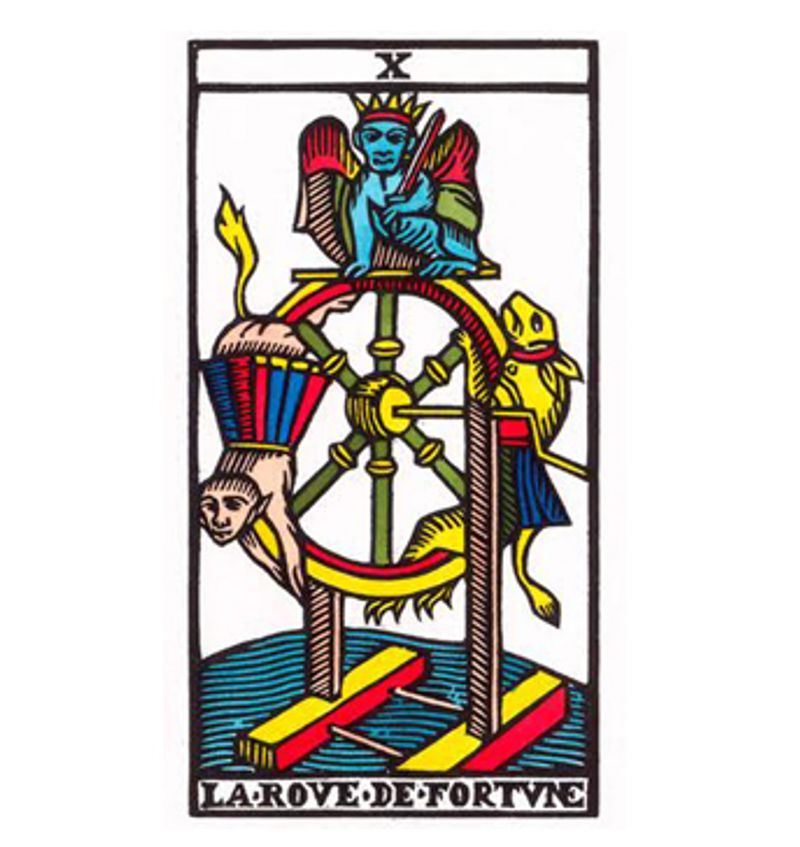 Tell us about the Perino Tarot project?

The Tarot de Marseille Perino is a complete tarot deck in the fashion of the Middle Ages and The Renaissance, carved into Japanese Linden plates by french artist Thomas Perino. Perino is a professional actor and is greatly inspired by Alice’s Adventures in Wonderland and Through The Looking-Glass. So he is a man who knows about shape-shifting, time travelling, and incorporating a piece of art. It seems to me that it is what tarot is all about. Thomas Perino has crafted his work with such love, dedication and intimate knowledge of the Tarot de Marseille that I was in awe when I first saw pictures of the engraved wooden plates with the characters and symbols on it. I am a tarologist myself, and I fell immediately in love, not only with the cards, but with the project. I wanted it to be known and shared by my peers. With friends Steven Lambert and Simon Thoral at french publishing house Le Feu Sacré éditions, we decided that le Tarot Perino was the next stage in our publishing project. 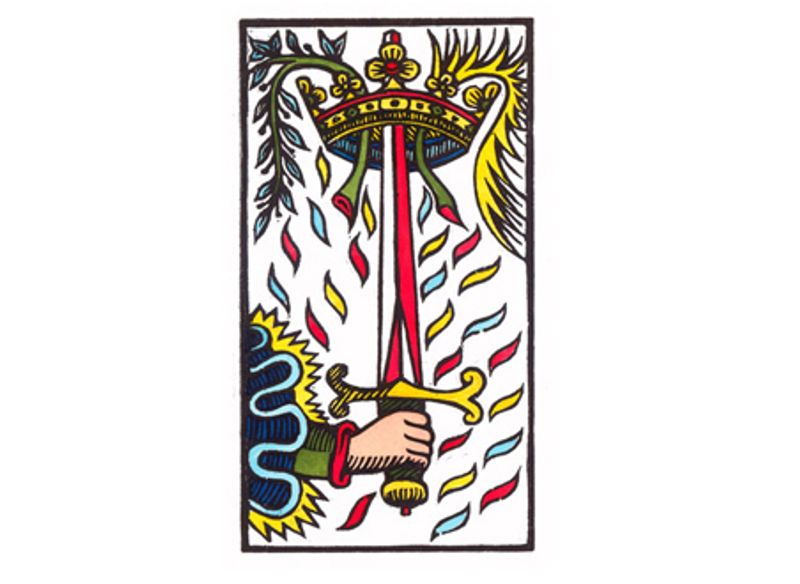 Can you speak about the book accompanying the cards?

So the book is in four parts. The first part is by Thomas Perino describing the engraving process- how and why. It explains the work through his dreams. Specifically two dreams he had that helped him create and finish the deck.

Pacôme Thiellement, a well known French Essayist of pop culture, provides the foreword with an intellectual approach to the tarot. For example he compares four different French poets and writers that wrote extensively on tarot. Through this exploration he champions why he views the Perino Tarot as a historic and political achievement in the wider history of tarot. He identifies three different enemies to human kind : the devil, the demiurge and time. He argues that time is completely connected to tarot as tarot is about time travelling inside our lives. Of course I am paraphrasing his idea here.

In another part Warren Lambert wrote an autobiographical piece about a heart surgery that he had and relates it to the suit of Cups in tarot. Cups represent the emotional side of life in tarot.

The fourth part if you like is the longest one. It's my text. It's the rules to play the game of tarot, the deck structure, identifying the cards and the 78 Arcana, how to use them poetically. 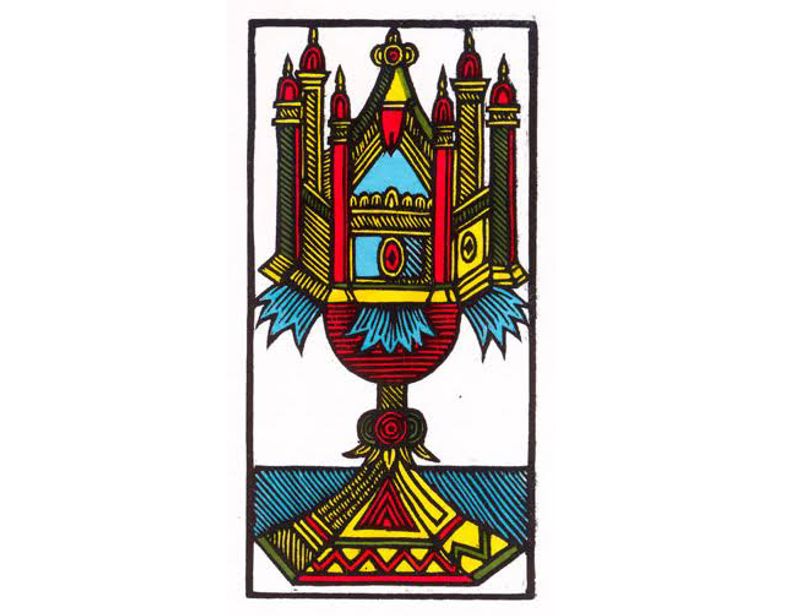 Can you tell us why you think the tarot bridges the ancient and the modern?

Tarot is about eternity. But, trying to be more specific, Thomas wanted to be true to the tradition. That is, being able to draw, engrave and hand-paint, all by himself, the complete 78 Arcana of the (Type 2) Tarot de Marseille, like the card makers of old. His drawings are not adaptations or a new artistic view of the classic Conver (a card maker from the 18th century) deck, but rather an attempt to revive a craftsmanship that has almost totally disappeared, for there were no tarot decks engraved in France for almost 40 years, and even longer for a Marseille deck. Today, lots of interesting or beautiful decks are being created and printed, but none of them has been processed the way Thomas has been working on his own tarot. He spent 5 years in the making of all its details. Today, for the most part, card makers are merely printers and publishers. I don’t know of anybody alive having treated the Arcana like Thomas did. As for the Modern, I would say that, beyond the obvious, the subtle differences a keen eye can spot between the Nicolas Conver tarot and the Thomas Perino tarot ask for a freshened, updated look at the cards. The trumps look like they’re so healthy they’re about to fly off the cardboard! It was made for us all, people of today, by someone of the 21st century, someone who could be your neighbour, someone who could be your friend. It is clearly a tarot anyone today can identify with. And the published deck will come with a companion book penned by four writers in their 30s and 40s, trying to firmly establish a connection with their readers in a poetic way.

Can you elaborate on how tarot is "a cathartic fiction and a philosophy for the future"?

Tarot has a way of healing. It was certainly not intended to be scary, or a nice little distraction, but something above those categories. To my eyes it is equivalent to a psychodrama where you have to perform each and every character all at once, in real life if possible. It is a multiple personality recorder, except this time the medium is a book with loose sheets. Thus you can change the order of the narrative, and swap the outlook for each character. Tarot offers a narrative for the healing of the future, because one has to take care of their future self. When the future becomes history, you can read the tale to yourself, because you lived the tale. You became part of a big chapter inside a tiny book called The World.

What do you mean by the World?

The World is the last major arcana and it represents fulfilment. It's the happy ending and the happy beginning of something new. 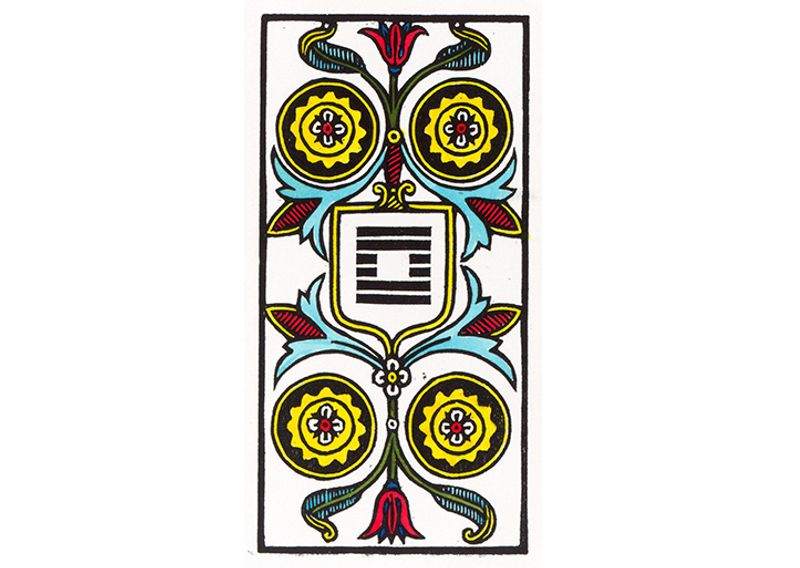 Why do you speak about the tarot as a game?

Tarot is a parlour game for the soul. It is here to be played, like a song, and to be played with, like a friend. That is why I consider tarot as a spiritual game as well as an esoteric device and vehicle of some sort. It takes you places. So let’s say tarot is not a card game but a software for the mind, a living community of archetypes and energies.

There is so much green and red in this deck!

Well actually Thomas Perino is Daltonic, meaning he has red-green colour blindness. So in the process he decided to correct some mistakes and leave others when he felt it was the right thing for the print.

You can support the Tarot Perino here