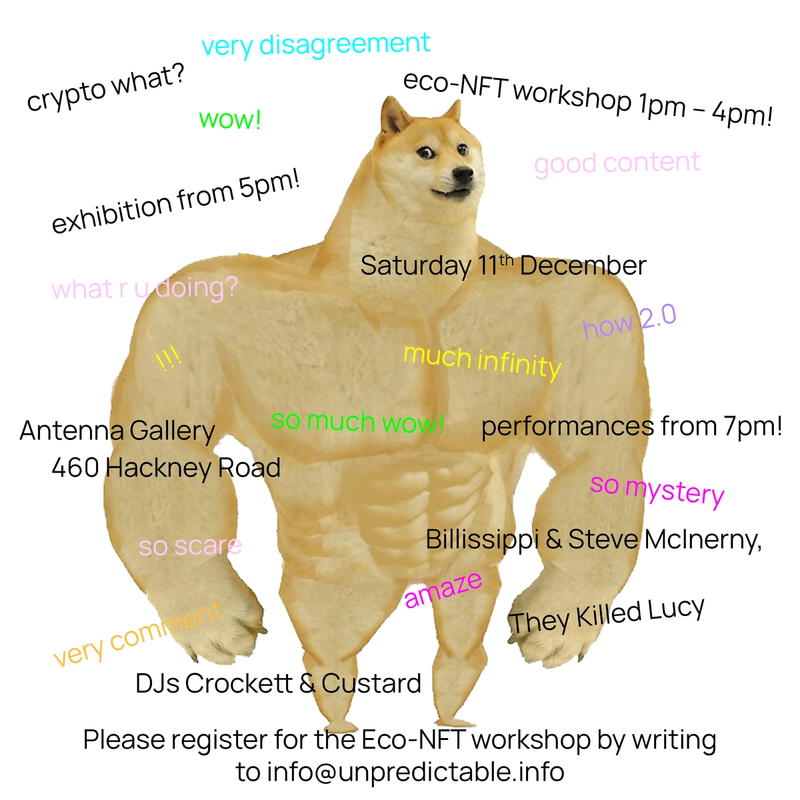 Following ¿CryptoQué? A workshop and NFT Exhibition created by Lenara Verle and Ilan Katin curated with Blanca Regina in Madrid in 2019, Cryptowhat? is a new Art & Blockchain saloon series led by Blanca Regina & Pierre Bouvier Patron in London in collaboration with its founders and other artists.First edition – introduction to NFTs

We will guide you into the blockchain art world and use Eco-NFTS
Bring your laptop. If you’re an artist bring a few art pieces in digital format (jpg or gif).
Duration: 3 hours.Content

Exhibition & Saloon
5 to 8 pm ( no need to RSVP)
The exhibition uses AR (augmented reality) to show digital blockchain artworks from a VR
space superimposed on a physical space.
On display are the blockchain art pieces created in the workshop.
The physical exhibition space is recreated in a blockchain-enabled virtual 3D gallery supported by mintbase.io
Using a mobile phone or a tablet, visitors can scan QR codes on the walls and access
the art pieces
A live feed of the virtual space is also video mapped in the exhibition space
The artworks will be available for sale, also in a beginner’s friendly format of a “paper
wallet”

The saloon, in collaboration with Muti, presents at 7pm Gmt

Blanca Regina is an artist, tutor, and curator based in London who is currently involved in creating audio-visual performances, sound works, multimedia installations, photography, and book arts. She has been leading audio-visual performance art and projection mapping workshops plus curated events internationally. ‘Expanded and Ephemera Audiovisual’ was her first solo exhibition presented in México, 2015. She has performed and created a number of films including artists, David Toop, Leafcutter John, Steve Beresford, Sharon Gal, Mandhira de Saram, Adriana Camacho, and Matthias Kispert. Her work has been supported by Arts Council England, Sound & Music, BMC, Amexcid, Photo-España, and Garage Cube. Last projects include the research with the Immersive Pipeline Project at Goldsmith University London and the artist residency at Solar, Tenerife, Canary Islands, Spain. http://www.blancaregina.art/

Pierre Bouvier Patron is a visual artist based in London. He is currently working with different media, such as digital video and film, exploring the boundaries between them and creating moving image works, performances, and installations. He has developed many practices and skills in various areas such as experimental film, documentary films, music videos, etc. He has been involved in video screenings and video performances, solo or in collaboration with musicians such as Syd Kemp, Neil’s Children, artist Blanca Regina, and many others. His work has been shown in France, Spain, the United Kingdom, Germany, etc. His latest works include

Unpredictable: Conversations with Improvisers, a series of 12 videos about improvisers in the UK. It also includes extensive participation with collectives such as Unpredictable Series, Strange Umbrellas, and a number of festivals including Sonic Waterloo, Art of Improvisers, Alterations Festivals among others. https://pierrebouvierpatron.tumblr.com/

Lenara Verle is an artist and researcher, has taught several graduate and undergraduate classes, as well as independent workshops, on the topic of art, technology, and collaboration. Her current research focuses on conceptual art in connection with alternative economies and currency design. She consults for blockchain art platforms and is a founder of Coinspiration.org. http://www.lenara.com/

Ilan Katin is a berlin-based artist who currently makes non-figurative drawings occasionally collaborates with musicians doing live visual performances, and sometimes ventures into the creation of installations. Since 2018 has been publishing and selling artworks in the Ethereum blockchain and helping onboard artists into this new technology.www.ilankatin.com

Reuben Sutherland is a New Zealander who lives in Britain. He is a VJ, director and visual artist, specialising in mixing up live action and animation.Sutherland has made music videos for The Doves, Phoenix Foundation and Röyksopp1] (their single Happy Up Here). He also created videos for the New Zealand-based independent record label Flying Nun Records. Together with noise artist Dan Hayhurst, Sutherland formed Sculpture, a visual and musical group which does live zoetrope-video art performances with a record player and a camera. Hayhurst plays improvised music with tape loops and effects equipment. Sculpture has performed in festivals and clubs in Europe, among which ATP was one. Works of Sutherland are being included in the tenth anniversary documentary about the All Tomorrow’s Party Festival. As a musician, he plays with various artists including Hot Dog Girrrrrl.This project is supported by near.org and muti https://linktr.ee/muti.collective