Leslie Deere is a multi-media artist working with sound, image and performance and virtual reality. Born in Tennessee, Leslie moved to London to study music, and is currently based in Glasgow where she is working on her new project ARRAY INFINITIVE, which merges meditative practice with experimental VR participation.

She will hold a workshop with us at Antenna Gallery on Saturday the 26th of February. See sign up info at the bottom of the article.

Antenna: How would you describe your artistic practice today?

LD: My practice is very multi-media. A couple of years ago I created a book of photography and I’m about to do a series of screen prints, but the main focus of my larger scale projects the past several years has been on gestural audio-visuals.

Where did you first start experimenting with sonic art and visual interaction?

My BA was in Sonic Art. From that point I was interested in sculptural objects and sound, or physical form and sound. The sound and image making more gestural, performative work has been happening since 2016, through a Sound and Music residency at Music Hackspace in London. 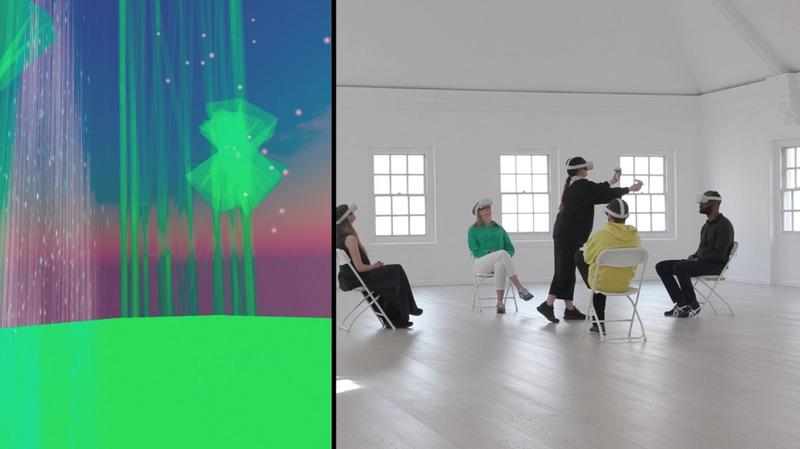 You are currently working on a project Array Infinitive. Can you describe the research intention behind the project?

This is a follow-on from the Hackspace residency work, which used a Kinect camera to play sounds live. There was also a silhouette projection behind me that echoed my movements in real-time. At that time I was looking at turn of the twentieth century technologies and that crossover happening between technology and spiritualism, as well as the idea of working with that which is invisible or immaterial. Clara Rockmore ( a Lithuanian violin prodigy and theremin performer ) was an important reference. The theremin was seen as a weird and futuristic instrument at the time, because it is played without actually touching anything.

My current piece is now taking that idea into VR. I am researching this encounter in VR as a means to reach an altered state experience. I’ve been working with Dr David Luke of Greenwich University and Breaking Convention to measure participant ASC response. I’m also trying to find out if a shared group experience can be achieved through this technology, on a local network in a shared physical space, and whether or not people can tell a human is conducting the experience.

What experience do your participants have? Are they the composers or are they guided?

Participants go on a journey through sound and colour. The group is stationary and remain seated. The idea is to sink into a comfortable position, to look and listen - to sit in the colour red for instance, or be enveloped by Indigo. There isn’t anywhere to go or navigate towards in VR, the worlds are abstract and graphic, stripped back to geometric form where the colour impact is important. 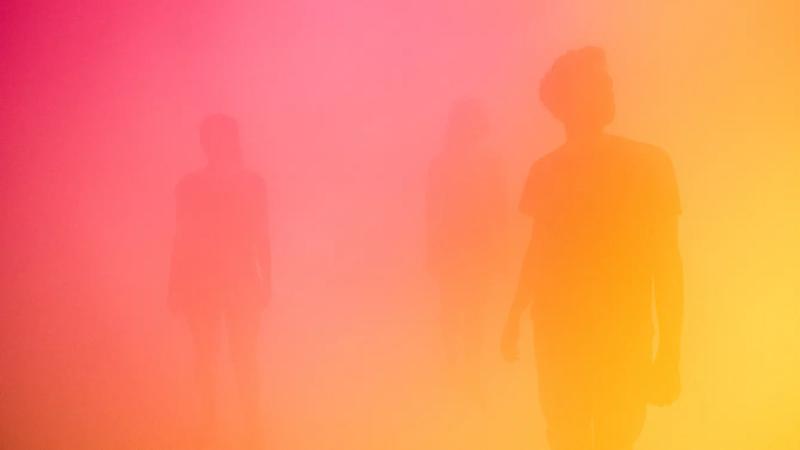 How does the colour spectrum function in the project?

There are seven VR scenes that travel up the colour spectrum or chakra system. I’ve tried to keep the elementals intact, for instance an earthy base sound for the colour red. I recorded a cellist in Glasgow and for blue a three part harmony vocal.

Who are the artists or creators that have inspired along the way?

I’ve been looking a lot at artists that make work which is activated by the experience of being with it, such as Ann Veronica Janssens installations or James Turrell, or even Bridget Riley and Op Art. So there is a temporal or experiential quality that becomes durational and also symbiotic. Exploding Eye films, psychedelic mandalas and multi-media work of the 60’s. Pieces that illicit a response, such as Catherine Yass’ films or the Rothko Effect. I’ve been thinking about the sensorial onslaught of the Ballet Russes - short performances that combine music, movement and art — the joining of different disciplines simultaneously as a tidal motion to the senses.

You have mentioned artists such as Hilda Af Klimt as an influence on the project.

I really love her work aesthetically, her use of colour, the minimal nature of it. Hilda af Klint, Annie Besant and Agnes Pelton — again back to that turn of the twentieth century time period, it was ripe. I’m not a painter but the layering that Pelton did takes a very long time, and those paintings are hypnotic without having motion. The abstract nature of these women’s work and the ways in which they were communicating something intangible through painting. Images and form coming through them as channels onto canvas. Honouring the messages or downloads they received at that point in time — that took courage. 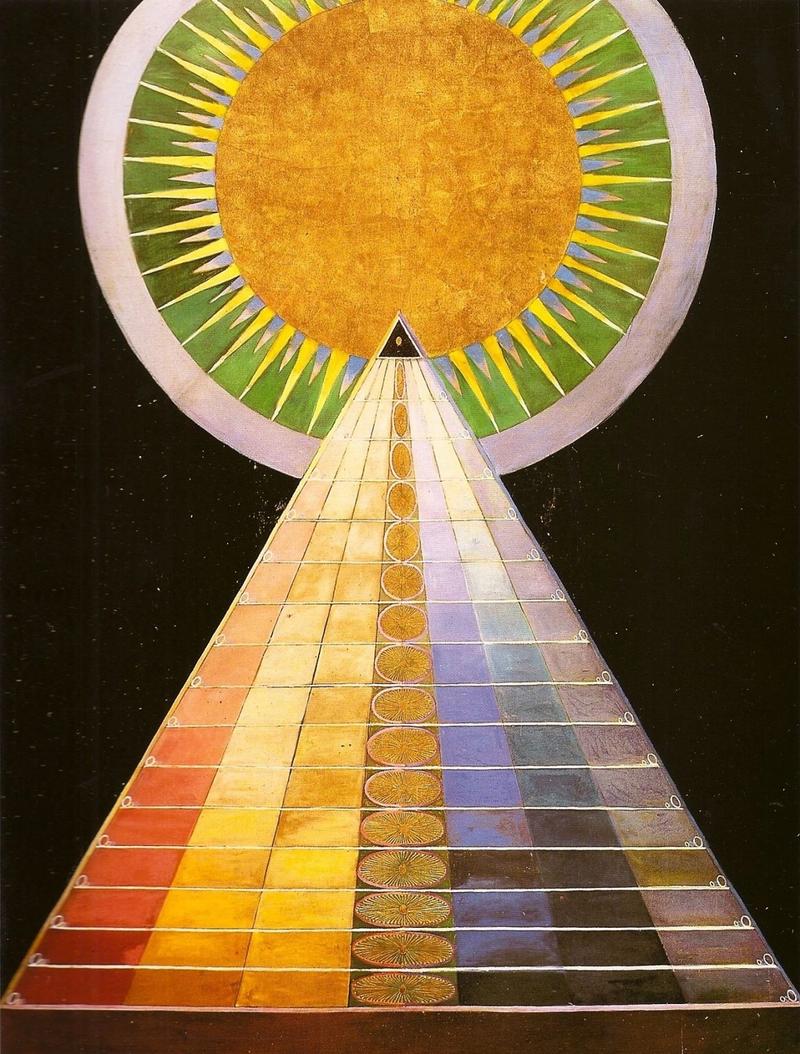 How do you intend the abstract visuals to function for the user or participant.

The visual palette in this VR work is abstract, fairly minimal and graphic. There are no figurative shapes. I did this intentionally hoping it would be easier to become immersed in it. In VR or CGI, working with objects that resemble humans is iffy, in that it can be cartoony really easily unless they are triple A game graphics, which this piece isn’t about.

How does the practice of meditation inform or guide the Affinity?

In group meditation people sit quietly and still in a room together. They just sit quietly and breathe together. That’s it. It is so simple but really powerful. That notion is what I’m inspired by here and trying to replicate for in this work. It has also been nice though when participants swivel their head, to look around the VR world, or reach out to grab an object floating by. But generally that act of ‘sinking into’ a position and being in a liminal space is something I’m trying to explore.

How is the project different from gaming?

Gamers, from my research thus far, tend to want to walk around or shoot something or teleport off somewhere. This experience is not active in the same way. Its kind of like being in a mixed-media installation, in multiple realities at the same time. Meaning, the sound is immersive and loud and amplified into the space — but visually you are seeing bold colours and ribbons of light through a headset attached to your face.

And then there is also a performance going on right in front of you, but you don’t see that in physical form, yet you can feel when air brush past or hear the floor creaking below. A few I have done this work for audience both in and out of VR, something really interesting opens up in this scenario. This reconfiguring of perfromance, or what performance is/ can be whereby audience are having different experiences visually and in terms of presence and immersion, whilst also having a larger collective experience together. I like the idea of different realities happening at the same time in a shared space. The sound really become the cohesive element and anchors the experience.

How do you see VR as affecting our lives and mental spaces? What do you hope for the future of VR integration in our lives creatively or psychologically?

During lockdown I discovered a VR group that held group meditations and group discussions. I would log on at a certain time and move my avatar to an outdoor space and onto a yoga mat-like object and take part in a mediation. All the teachers were Buddhist practitioners and had different formats, but at the end the teacher would have a few words with anyone who was up for sharing. It was fascinating being in the same virtual space together while being physically distanced and meeting people from all over the world.

I also just did my first freelance job in VR. I helped at an event for the UN Climate Summit, which was supposed to happen in Dubai but instead happened on VR a couple of weeks ago. It was really weird and interesting going to an induction session in VR with strangers. So with these sorts of things — gathering at a distance, teaching / learning, there is great potential. At the same time, I don’t like that Facebook has co-opted the term metaverse and their assertion into VR is not without its concerns, given how they’ve handled themselves up until now. I started this project before Meta existed and I’ve never had a Facebook account. Big tech is problematic. Can we use it for our own purposes? Creative people finding ways to use technologies for creative purposes and with good intentions — sometimes to make a political statement and sometimes to give you a certain experience.

You are running a workshop pilot at Apiary Studios this month. How do we sign up?

The sessions are running at Antenna Gallery on 26th of February at 12pm, 3pm, and 7pm. You can sign up here.